There exist a small group of very well documented and highly sought after samplers that were worked in the Muller Orphanage Houses of Bristol, England from the 1860's through the 1890's. Large numbers of orphans were housed and educated there and this education was geared to provide the orphans with skills that would ultimately help them gain useful employment, thus needlework of the highest standard was central to the curriculum for females. The samplers worked at this school are highly recognizable and renowned for their great precision and minute detail. The City of Bristol Museum owns a number of these samplers and a 1983 catalogue that accompanied an exhibit of their samplers notes that Bristol Orphanage samplers were "invariably worked in red with an occasional touch of blue and are distinguished by the regimented rows of alphabets and small border patterns." Other hallmarks of these samplers are a depiction of the bible, various crowns and other royal representations and tiny pictorial images.

Although these samplers all share the same general composition and high quality needlework, their makers made some individual choices. This sampler features

To quote the City of Bristol Museum catalogue, "The majority of the girls went into service upon leaving the Homes and they would have reason to be grateful for the sound training they received there." Bristol samplers come into the market very rarely and many are in the collections of the museums, such as the Fitzwilliam Museum in Cambridge.

There was a Julia Burgess born in 1855 in Mangotsfield, Bristol, the daughter of William Alfred Burgess and Emily Ann Churchill. Her mother died when she was eight and her father remarried. In 1868, at the age of 13, her father died as well, leading to her time at the Orphanage. For the 1871 England census, she is living with her stepmother in Staple Hill, Gloucestershire. Sadly, Julia's death is recorded in 1878, at the age of 23.

Visit our interactive map of samplers »

Click on samplers to view larger.
Do you have 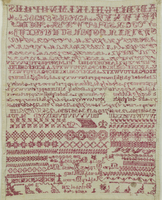