Legend of the Black Bitch of Linlithgow:

‘Twas off the bonnie banks of Linlithgow Loch, some 350 years ago, the King had sentenced a thief to starve to death ordering him chained to an oak tree on a floating islet. The captive’s faithful companion, a black greyhound, tread through icy waters with food in her mouth attempting to save her master’s life. When the palace caught on to the canine’s caper she was shackled to a different tree on a nearby islet leaving both prisoner and pooch to perish. From that day forward the townspeople of Linlithgow were so touched by the dog’s loyalty that they started referring to themselves as “black bitches.”

This group of samplers all have a portrayal of this story in one of two medallions - a depiction of the coat of arms of Linlithgow, complimented with a medallion containing the thistle that represents the coat of arms of Scotland. The medallions have words written around their borders that varies from sampler to sampler.

While there are several other things these companion share, there are just as many individual traits. For example, Margaret Alexander has replaced the thistle with a deer in the second medallion. Cathrine Watt has no medallions. Learmonth and McKenzie share the building with the three-peaked roof and the guard at the door. Duncan and Buhanan are joined by a shepherd and his sheep in the lower left corner as well as having the same verse and the same Mrs HD, presumed to be the teacher. Interesting that Watson and Taylor also have initials ending in "D". Perhaps the "D" family were a family of teachers. We know Mary Duncan and Janet Learmonth were born in Linlithgow and Margret Alexander in Carriden about five miles away.

In searching for additional samplers, we found Margaret Taylor, a reproduction kit done by The Essamplaire. This has the house and is in the more formal style like Margaret Watson. Both have the initials MD, possibly the teacher, but the only initals on Margaret Taylor are ID, ID and MD. 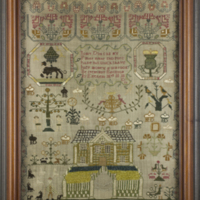